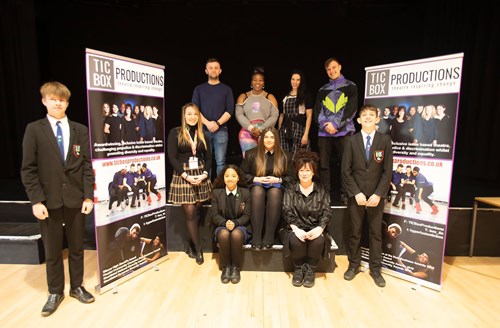 Hundreds of teenagers have learnt to spot the signs of domestic abuse after watching a powerful play organised by Eastlight Community Homes.

The housing association, in partnership with the Braintree District Community Safety Partnership, arranged for educational theatre group TIC Box Productions to perform The Bruise You Can’t See at seven secondary schools across the district.

Shani Roberts, 14, was one of the first students to watch the play at Notley High School.

She said: “It was interesting to see the different indicators of domestic abuse – I learned that it is not always obvious.

“The fact that it was a play made it really interesting – it wasn’t just a lesson.”

Eastlight Anti-Social Behaviour Co-ordinator Katee Swallow said: “This is such an important lesson for students and will help them to recognise any signs of domestic abuse before it is too late.

“I hope it will help them to sustain healthy relationships in their future and know what to do if they are faced with domestic abuse.

“We are here to support our residents and communities tackle societal issues like domestic abuse.

“The show was very good – it reached out to the students using language and a style they can relate to.”

Cllr Frankie Ricci, Cabinet member for Communities at Braintree District Council and chairman of the Braintree District Community Safety Partnership said: “Domestic abuse is a very important issue and it is vital for young people to understand what a healthy relationship looks like and that they’re not alone if they do experience any kind of domestic abuse.

“Support is out there and we want that to be as accessible and visible as possible.”

Last year, Eastlight was the first housing association in Essex to be awarded a national accreditation from the Domestic Abuse Housing Alliance (DAHA) which recognises the association’s determination to tackle domestic abuse in all forms and provide support for staff and residents.