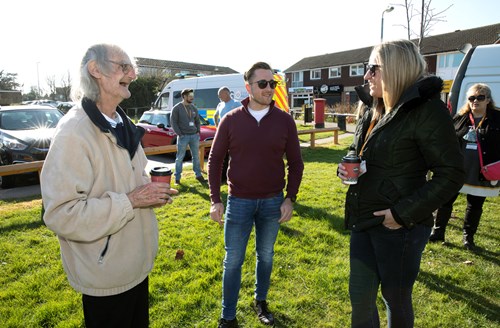 Eastlight Community Homes is to set up a Resolutions Team to oversee all residents’ complaints.

The dedicated team will have oversight of all complaint cases and will ensure residents receive regular updates about the progress of their cases.

It’s part of an overhaul of the Complaints and Resolution process which has been developed following detailed analysis of existing processes for handling complaints.

A new policy has now been produced and ratified by the resident-led Customer Influence Committee of Eastlight’s Board. Staff will undergo training in the new policy and procedure, and it is hoped that the new systems will up and running by the late summer.

Michelle Sannerude, Head of Customer Services, said: “The review of our previous policy and process highlighted a number of issues we needed to address. They included a growing tendency to categorise customer concerns as “expressions of dissatisfaction” rather than recording and investigating them as the alternative “complaints” category.

“We have removed that categorisation, and all concerns raised by, or on behalf of, our residents, will in the future be recorded and investigated as complaints.”

The review, conducted by external consultants earlier this year, found that our processes were not code-compliant, carried inefficiencies and did not put residents at the centre of decision-making.

The aim of the new policy and revised process is to:

Michelle said: “The review of our previous policy and process suggested that we were not always communicating with resident about the progress of their complaints, that we had inadequate resources to properly investigate complaints, and that our processes were not being followed consistently.

“The creation of a Resolutions Team within the Customer Services Team will help to address many of the review findings and create a swifter, more consistent approach.”

Under the previous policy, if a resident was unhappy with the outcome of their complaint, their appeal would be considered by a panel of residents. Under the new Policy, the Stage 2 process will be managed by a senior manager from a department unrelated to the specific area of complaint.

Michelle said: “We see complaints as an opportunity; a chance for us to address any shortfall in our service delivery, to enhance the quality of our overall performance and to build even closer relationships with our residents.”

The new Complaints and Resolution Policy can be found here.