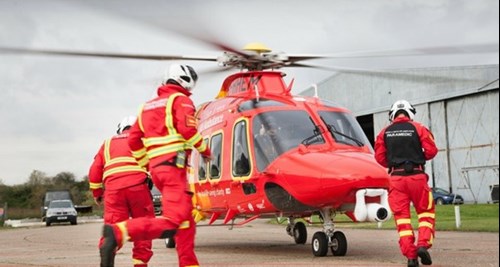 BIG-HEARTED staff at a housing association have done their bit to keep a lifesaving service airborne.

Staff at Eastlight Community Homes have raised £1,500 for the Essex and Herts Air Ambulance Trust.

The vital charity was chosen by customers and staff of Greenfields Community Housing to be its Charity of the Year for 2020.

Fundraising continued when Greenfields merged with Colne Housing to become Eastlight in July 2020.

Supporting the ambulance trust is a personal mission for some Eastlight staff, include Governance Advisor Yvette Boreham, who believes the charity saved her father’s life when he suffered a cardiac emergency in 2015.

“He was round his friend’s house for dinner,” she said.

“The friend went to make tea and when she came back, he had just stopped breathing.

“She called 999 and both the land ambulance and air ambulance, which landed in the local park, arrived within minutes.”

The initial thoughts of the land ambulance medics were to take Yvette’s Dad to Broomfield Hospital in Chelmsford. However, the air ambulance experts decided he had to be seen by heart specialists at Basildon Hospital.

“The decision to take him straight there saved his life, as he probably wouldn’t have survived the journey of being taken to Broomfield first,” Yvette added.

“Not a day goes by when we don’t think about it.”

Once at Basildon he went straight into surgery for life-saving treatment for what it turned out were two “silent” heart attacks with no obvious symptoms.

He was in hospital for 12 days, recovered and has now just celebrated his 81st birthday.

Mark Leete, Eastlight’s GDPR Project & Information Manager, was at his sister’s in Stratford when he received a shocking phone call from his dad, explaining that his mum was badly injured at their home.

The air ambulance soon landed in a nearby school field.

Once Mark’s mum was stabilised, she was flown to Royal London Hospital in six minutes and taken immediately into surgery. She made a full recovery.

“Thanks to the air ambulance my mum had an extra five years of life,” Mark said.

“You don’t really how important they are until you need them. It’s a minute between life and death.”

Clair Mitchell, Fundraising Coordinator at EHAAT said: “On behalf of everyone at the charity, thank you so much for your support, this is very generous donation, and it really is appreciated.

“Our fundraising efforts have been hit hard by the COVID-19 pandemic, which has seen events and initiatives being cancelled and postponed during the lockdown.

“Despite this over the last few months our critical care teams have continued to provide our life-saving service 24/7. That’s why now, more than ever we need support from the people and businesses of this region, so thank you for your support.

“Our missions are funded by your donations, and we can’t fly without you.”