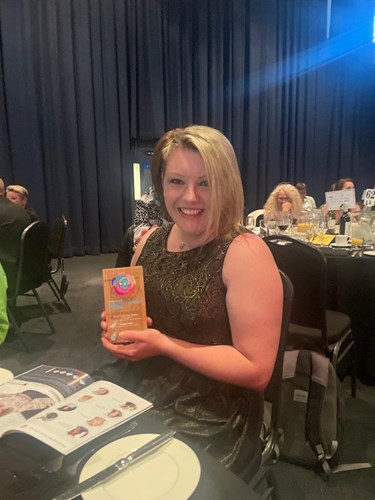 Michelle Baker, an Eastlight Community Homes resident from Shalford, has won a national ‘Women in Housing’ award for her contribution to her communities and housing association.

Michelle’s life changed when her first son, Eli, was diagnosed with a rare genetic condition at six-months-old. At the time, she was a career-driven self-employed accountant who was expecting her second child, Oscar.

Oscar, now five, is partially deaf and Eli, now six, is partially sighted and vulnerable to infection due to low immunity. Eli has other medical complications and has had around 30 operations.

When Michelle suspended her career to look after him, she and her husband – who is also self-employed – struggled to rent privately and the family lived in a caravan before becoming tenants of Greenfields Community Housing.

Michelle’s experiences made her appreciate community and mutual support networks, and she has since become heavily involved in a range of voluntary and charitable activities. These have included playing a significant role in Greenfields’ merger with Colne to form Eastlight in July 2020 and becoming an Eastlight Board member and Chair of their Customer Influence Committee. This has led to her winning the ‘Board/committee member of the year’ Women in Housing 2022 award.

Emma Palmer, Eastlight’s Chief Executive, said: “Since Eastlight’s formation, Michelle has influenced some of our most trailblazing ideas.

“These include our Customer Influence Committee, a board committee chaired by Michelle, formed in May 2021 to ensure residents’ voices influence and improve our services. Originally, we required residents to go through a traditional governance recruitment process to join the committee, but Michelle pushed back.

“She led a second phase of recruitment, which focussed on individuals’ commitment to their communities. We received more than 22 applications from a diverse group of people, and the positions are successfully filled. We are so proud of her achievements.”

Michelle said: “I’m really pleased to receive this award. It amazing to be recognised, and I hope it will inspire tenants everywhere to get involved at that level in their own housing association.”

Michelle has also played a fundamental role in establishing Eastlight’s partnership with disability organisation, Purple, through which they aim to improve the disability experience of people living and/or working in social housing.

And alongside running her own accountancy practice, Michelle has taken on a host of other roles within her community. She is clerk to her local parish councils – Panfield, Shalford and The Salings.

Michelle also set up a charity, Wethersfield Community Activities, which has been running for a year, and helps local groups run activities, such as parent and toddler sessions.

And Michelle regularly speaks at charity events for carers, focussing on helping them to juggle their personal and professional commitments. She’s on a personal mission to highlight the skills and benefits carers bring to workplaces.

See more about the Women in Housing awards here.